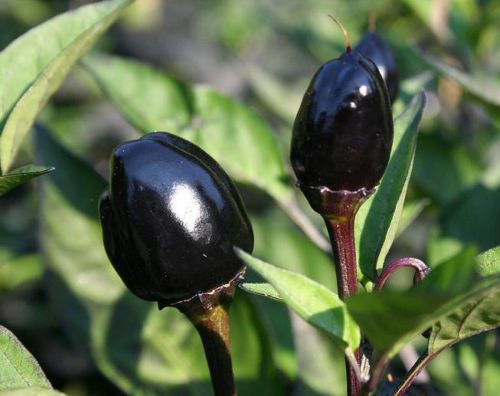 Chillies peppers (Capsicum species) originate from the Western Hemisphere, the tropical regions of the two American continents. They are botanically perennial if grown in their natural habitat, but in colder climates, they behave as annuals. Some chillies, if kept indoors during the winter, produce plenty the following year.

Is it Chili, Chile or Chilli? All three are fine. In the United States the correct spelling is: chili. In the United Kingdom, New Zealand and Australia, chilli is preferred while chile is used in the Spanish-speaking countries.

There are over 10,000 varieties of chillies in the world. On average, chillies grow just under a meter. That being said, there are chillies that reach 10 meters in height. Domesticated chillies are usually self-pollinating, that is they don’t need another plant to produce fruit. The pollination process is carried out by insects or the wind. When in close proximity chillies cross pollinate and if the varieties are different, the resultant seeds are hybrid. Growers who want to preserve the purity of their seeds plant different types 1.5 km apart or in separate greenhouses.

Chilli fruits come in a large variety of colours shapes and sizes. Unripe chilli pods vary from green, white, yellow or purple and ripe pods can be green, white, brown, yellow orange and red. Most varieties can be harvested after 70 days in the green state, but are fully ripened after 130 days.

There are over 30 different species of chillies (Capsicum species) and over 10,000 varieties. Lots of the varieties still remain wild and can be found in the depths of the rainforest. Around 6000 varieties are cultivated and they belong to five species, capsicum annuum, capsicum baccatum, capsicum chinense, capsicum frutescens and capsicum pubescens.

Capsicum Annuum is the most widely commercially and privately cultivated chilli species in the world. Although the name should suggest that it is an annual plant, it is a perennial. Because this species crosses with ease, thousands of varieties have developed, including the prolific Jalapeño.

Capsicum Baccatum takes its name from its berry like looks. Don’t be deceived by the name, however. Some of these chillies bare very large pods. In South America they are called ‘aji’ ‘/ah hee/. The Bishop’s Crown is probably the most popular variety of this species.

This species comes from Amazon Brazil, but it was mistakenly taken for Chinese by a Dutchman in the 18th century. This is the most popular chilli in the Caribbean and in the tropical regions. With Fatalii and Habanero being the most popular of the species, you could safely say that we’re dealing with a very hot chilli species.

This species takes its name from its bushy nature. Tabasco and the African Birds Eye chilli belong to this species.

Capsicum Pubescens take their name from their hairy leaves and they are the least known of the chilli species.

Sweet peppers and chillies can be grown in pots on a sunny, warm patio in a similar way to tomatoes, but will produce a better crop when grown in a greenhouse or conservatory. Chillies and peppers are green when young, maturing to a variety of colours and flavour varying from mild to extremely hot.

Peppers and chillies need a warm, sunny sheltered position and, therefore, are only suitable for outdoor cultivation in milder parts of the country, and benefit greatly from cloche or even fleece protection. They can be grown in frames, unheated polythene tunnels or greenhouses and are also suitable for growing in containers or grow bags filled with multipurpose compost.

They require well-drained, fertile moisture-retentive soil, which is slightly acid. To achieve this, incorporate moderate amounts of well-rotted manure (5.4kg per sq m/10lb per sq yd) into the soil, but avoid using fresh manure, or large quantities as this may lead to lush, leafy growth at the expense of fruit.

Plants will be ready for planting in their permanent position or potting-on when they have reached flowering size, approximately eight weeks after sowing.

Peppers naturally branch into two or more stems with a flower bud at the joint. To encourage side shoots on slow-growing plants, pinch out shoots at 30cm (1ft).

Staking is needed for high yielding plants and those grown in growing bags. Several canes should be used per plant as the stems are brittle.

In mid-February or early April, sow fresh seed for plants that are to be grown under glass, and in late March for peppers to grow outdoors.

If you can’t provide sufficient heat for germination and growing on, young plants can be purchased from garden centres in spring. Grafted seedlings of both chillies and peppers can also be ordered from suppliers for delivery from mid-April and are especially useful where growing conditions are a little cool.

Once seedlings are 5cm (2in) high, transplant them into 9cm (3½in) pots, maintaining high temperatures to encourage growth. They can then be potted on into 10-12.5cm (4-5in) pots, once their roots fill the compost.

Harden off plants for two to three weeks, before planting outside in late May/early June, once all danger of frost has past. Warm outdoor soil with polythene or cloches two weeks before planting out. Cover plants with a layer of fleece to provide wind protection, preferably till end of June.

Peppers and chillies are commonly attached by aphids, red spider mites and whitefly in cold frames and greenhouses but biological control can be effective.

Botrytis (grey mould) can occur on stems, petioles and fruits in cool, wet weather, but quick removal of diseased material and increasing air circulation reduces damage. Soil-borne disease such as verticillium wilt and sclerotinia can be an issue, so grow on a fresh site or in growing bags".

All prices are in GBP.